I can’t believe it’s already June and I’m just posting my first blog of the year. I do have some excuses. The book I’m co-authoring with David Pleasance does take up a lot of my spare time although that is not the only reason for my tardiness. Several of the companies I’m directly involved with have been helping to protect the world from COVID-19. One company in particular received official clearance from the New Zealand Prime Minister to keep production up and running throughout the various New Zealand lockdowns last year. Not that we’ve really had it that bad in New Zealand compared to many other countries around the word. The additional work pressure has prevented me from enjoying my Amiga hobby as much as I would like.

With 2020 well and truly behind us it has certainly been a year to remember and one we  probably want to quickly forget. For Amiga enthusiasts the year marked the 35th anniversary of the Amiga’s launch and, way back in January 2020, which seems like a lifetime ago now, Amiga Ireland was the first of many international shows planned to celebrate the event. Unfortunately, after the outbreak of COVID-19, it was not to be as major Amiga shows in the UK, USA and Netherlands were delayed then eventually cancelled as the pandemic quickly spread around the world. Fortunately, Brian Deneen, Jerry Gray and the rest of the SACC team, in collaboration with Bill Borsari and his AMIWEST Broadcast unit, ensured that Amiga 2020 went ahead as usual, albeit in digital format making it the 23rd consecutive AmiWest show. I still can’t see many Amiga shows happening this year and am looking to 2022 before we can start up again.

It’s in the bag

As I mentioned, apart from work, much of my free time has been taken up with the book I’m co-authoring with David Pleasance. I’m pleased to report that we have more or less finished Volume one which is now in the hands of the proof reader having been meticulously edited by Simon Busby, our very strict editor. I had not realised how much effort was involved writing a book. It’s been an interesting, enjoyable though very time-consuming experience. Fortunately 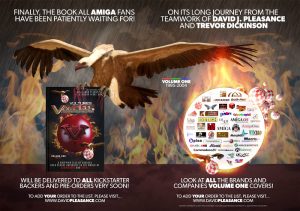 David has looked after all of the administrative hassle like handling all of the Kickstarter communications, organising artwork production, dealing with printers and publishers and generating publicity for the books. I have concentrated on researching the history, obtaining quotes and submissions from other contributors and finally writing the text chapter by chapter. When a chapter’s finished I pass it to David for review and comment. It an iterative process which can take two or three edits before we are both happy with the content.

After that, we forward it to Simon to perform his magic. That’s when the real works starts! Just joking but Simon really does a remarkable job ensuring that the story integrates well and that all news releases and comments are accurately referenced with working web links wherever necessary. He also corrects any typos and grammar and adds an extra sense check to the flow of the story. He’s a hard taskmaster but David and I would have it no other way. We have been through multiple edits and rewrites, and that is after David and I had originally signed off each chapter.

One things for sure. Whether you like the book or not the text will have been fully researched and cross-referenced with additional comments from people who were actually involved. As I said, the next step is proof reading and Dave McMurtie, father of the Commodore International Historical Society, has taken on the task. If you don’t know Dave, check out his illuminating interview with Don Greenbaum the former treasurer of Commodore International. It provides a fascinating insight into the complicated lifestyle of Irving Gould, Commodore’s itinerant chairman. Dave is powering through his proofreading task and passing his findings back to Simon for the final review and sign off.

Although my previous Amiga Retrospective and Classic Reflections series for Amiga Future magazine, have provided the backbone for the book we have also unearthed a lot of new information and some untold secrets that have never been revealed before. 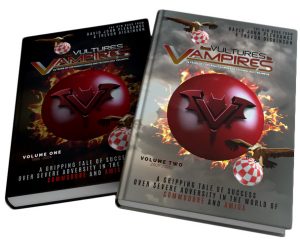 The second Volume is already half written although we have not passed any of the chapters to Simon yet. Naturally, David is desperate to get the second volume to the printers as soon as possible but we need to make sure that the content is accurate, readable but most of all enjoyable. I hope we do not disappoint!

I think the post Commodore Amiga story makes fascinating reading and if they ever decide to make a film about it, I want to be played by Tom Hardy. I see David as Anthony Hopkins. Hey, who said more likely Laurel and Hardy! 😉

With apologies to Depeche Mode for stealing their song title, but I think it describes Anton Preinsack who recently signed up to A-EON’s AmigaDeveloper team and rejoined the ranks of AmigaOS 4 beta testers.

He acquired his first Amiga in 1989, an Amiga 500, which was followed by an Amiga 1200 a few years later. Anton, who is a professional journalist and screenwriter from Vienna, Austria, is no stranger to the Amiga next-generation scene. He purchased an A1-SE from Eyetech and wrote the first review of AmigaOS 4 for a German magazine before its public pre-release. Over the years he has worked for various Austrian print magazines and also written numerous articles for Amiga Plus and Amiga Future. Apart from his Amiga & AmigaOS passion he likes movies, DC Comics and writing horror stories. Hey! who said “the curse of the Amiga?” 😉 One of his horror stories, “The Maggots”, was recently published by Blitx Verlag in the latest edition of Super Pulp. He also has two screenwriting credits for a drama and a film short. Anton explains,

I had always a passion for writing and in combination with my interest for movies I decided to visit a film school in Austria to become a professional screenwriter when I was young. Although I never had a big breakthrough in the film business and Spielberg never called me, I was involved as screenwriter in some smaller Austrian film productions e.g the movie “Michelle” (1993) and earned an official Austrian Screenwriter award in 1999. 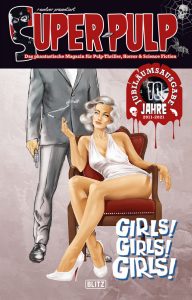 I’ve written many AOS4-related articles and interviews. After my A1-SE phase I took a short break from beta testing only to become involved again when ACube released the SAMflex system. I reviewed of one of the very first motherboards produced. In 2014 I signed up to X5000 beta test program but unfortunately, because of financial difficulties l had to give up my place on the team [which was taken by Benny Damsgaard] as I couldn’t do as much testing as I had done in the past. However, my name was on the Cyrus+ motherboard and I vowed to rejoin the beta test program as soon as I was able. I’m pleased to report that this year I joined A-EON’s X5000/40 beta test program and now have my very own system which is up and running with AmigaOS 4.1 and Enhancer Software 2.0. It’s a really nice system and my best AmigaOS 4 experience so far. My main AmigaOS 4 focus over the past 20 years, apart from beta testing, was applying my journalistic skills writing articles and conducting interviews with key Amigans and I hope to continue this work in the future. I’ve even translated some of Trevor’s articles for the German language edition of Amiga Future and hope to involved in some other translation work in the near future. 😉

Many thanks Anton. Welcome back to the Amiga family.

DvPlayer, created by Stephen Fellner, was one of the first professional video players for AmigaOS 4. A feature limited OEM version was supplied as contribution with the AmigaOS 4 distribution iso. Registered users could purchase an update to the full version which included support for many video formats including MPEG-1/2, AVI, ASF/WMV as well as MPEG audio files and VideoCD, SVCD and DVD video.

Unfortunately, although a beta version was developed it was never commercially released as Stephen needed to concentrate on supporting his own business and, at the time no other developers could be found to complete the work.

Fast forward to 2021, and I’m pleased to report that our graphics guru, Hans der Ruiter picked up where Stephen left off and has produced a new beta version of DvPlayer which is currently under test.

It allows high resolution video files to be played either in full screen mode or scalable windows which can be resized on the fly. Matthew Leaman has informed me that, all being well, the new version will be released on AmiStore next month. In the meantime here is a screen capture of DvPlayer playing an HD and 1080p video simultaneously on the X5000/40.

In other good news, Matthew has informed me that Martin Merz of Mason Icons fame has granted A-EON permission to distribute his AISS (Amiga Image Storage System) with any future A-EON software projects.

Martin has already created a distinctive  icon set for A-EON’s Enhancer Software pack but you might be surprised to learn that he has been producing AmigaOS icons for 20 years. He started in 2001 with toolbar replacements for the AmigaOS. However, he received an increasing number of requests from developers wanting special icons for their projects. When he realised he was getting repeated requests for the same basic icons he decided to create a standardised archive which became the foundation for for his AISS initiative. At the end of 2003 he collected all the icons he had created into one archive and devised a standard method for accessing them. The first public released of AISS was in June 2004 with a set of glow icons for AmigaOS 3.5 and 3.9 systems.

Initially he used Personal Paint 7.1 to create his icons but after Amiga, Inc. announced a cooperation with Corel he switched to Photo-Paint. Unfortunately the relationship between Corel and Amiga, Inc. never materialised but that did not stop Martin from adding to his growing Icon collection.

His latest version, AISS 4.22, contains over 2,600 images, most of which are in 16×16 px and 24×24 px in 32-bit and Alpha Channel format. When Martin was asked about his future plans for AISS he  said, “I want to make sure that AISS remains free and will continue to be free for the benefit of the community”, Many thanks Martin, the Amiga community appreciates and thanks you for your excellent work.

Talking about Matthew, he has just infomed me that Ross has joined his AmigaKit team to help him with his ever increasing workload. Sit down everyone who said about time too. 😉 Seriously though, AmigaKit has supported the Amiga community for over 16 years, and is one of the few Amiga retailers who has funded new hardware and software development for both Classic and Next-Generation Amiga systems. Welcome to our world Ross, you can buy me a beer next time I’m in Cardiff! 😉

Oh, I almost forgot. I received a selection of images from ACube’s Enrico Vidale …………