I can’t believe it’s been four months since my last blog as I prepare to depart the shores of New Zealand again for some more “Triple-A” Amiga fun.

Just where does the time go? In the intervening months I’ve met up with Amiga Enthusiast, Olav Fagerlund in Tokyo, while I was visiting my daughter in Japan, before travelling on to Europe with my 18 month grandson to introduce him to his 92 year old Great Grandmother in North East England. If you are a regular reader of my blog you might recall that Finn was born in NZ while I was in Sacramento attending the traditional Saturday night banquet dinner at AmiWest 2017. I certainly had a few drinks to celebrate that night. 😉

When I was in Europe I visited Timothy de Groote and Ben Hermans of Hyperion Entertainment in Brussels before travelling to Cardiff to meet up with Matthew Leaman the Managing Director of AmigaKit and my partner in A-EON Technology. While I was in Cardiff we welcomed the visit of Laurent Zorawski and Franck “Sheldon” Bednarski from Amedia Computer France and discussed possible future cooperation to help expand the Amiga market.

I’ve even managed to squeeze in a meeting in London with Timothy de Groote and Michael Battilana of Cloanto & C-A Acquisition Corporation as we tried to find a mutually agreeable compromise to the current legal impasse.

Although not successful on this occasion, it was still quite an enjoyable day and at least I got to see the spectacular view over a very misty and rainy City of London from the heady heights of the new Shard tower. Does every cloud have a silver lining? I certainly hope so.

On the road again!

As I pack my bags for the trip, I can’t help humming that old Willie Nelson song, “On the road again”. My first stop is Calgary to attend AMIJAM 2019, run by the Amiga Users Group of Calgary, at the invitation of AmigaOS 4 developer Steven Solie. I’ll also be staying with Steven and his family during my short stay in Calgary. It will be a good chance to discuss future development plans for ExecSG. After that it’s onward to Europe for a short side-trip to Brussels before travelling to Cardiff to attend A-EON Technology’s DevCon 2019 organised by Matthew Leaman. It’s always good to catch up with active Amiga developers to discuss the finer points of AmigaOS over a beer or glass of wine (or in the case of Steven Solie a coca-cola as he doesn’t drink alcohol). Finally, it’s over to Cologne in Germany to attend Gamescom 2019 in Cologne at the invitation of Andreas Magerl of Amiga Future.

This will be my first visit to Gamescom, which by all accounts is a massive affair and probably the largest video games show in the world (based on the number or visitor and exhibitor space). 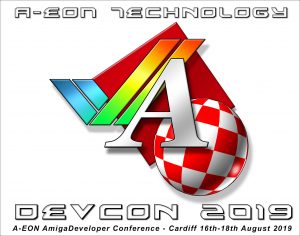 Last year 370,000 visitors and 1037 exhibitors from 56 countries attended the event. I’ll be joined on the Amiga Future stand by Daniel Mussener along with his AmigaOne X5000 and A1222 and together we will help promote A-EON’s AmigaOne hardware, AmigaOS 4.x and of course Daniel’s excellent selection of Amiga OS 4 games.

I will also have my latest ALICE Laptop with me, courtesy of Alex Perez of Rabbit Hole Computing, and will be able to demonstrate the Classic version of AmigaOS 4.1 Classic and the AmiKit version of AmigaOS 3.x with it’s unique Rabbit-hole features which allows mainstream Linux programs such as Firefox and Libre Office to be run from the AmigaOS workbench. While I’m in Cologne I will be staying with Daniel and his family and will get to meet his new baby daughter.

Before I return to New Zealand I will also try to squeeze in some other Amiga related business. It’s a very busy schedule but, as I’ve said several times in the past, it’s a hard life and someone’s got to do it. 😉 Of course the trip is not just about Amiga fun and I have to attend to some other non-Amiga business too.

Standing on the Soapbox

Talking Amiga Future. While my blog has been quiet of late I have continued to submit my regular Soapbox articles to Amiga Future magazine which is published bimonthly in both German and English language editions.

The next issue to be released is number 140 which probably makes Amiga Future the world’s longest running professionally produced Amiga magazine. It has already surpassed the once mighty Amiga Format which ceased publication in May 2000 after 136 issues. 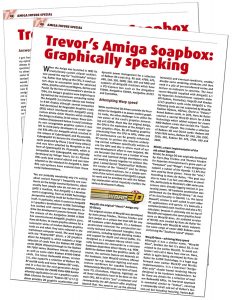 Of course the circulation numbers of Amiga Future are a fraction of Amiga Format’s in its heyday but it’s still hard to believe that 25 years after Commodore’s demise a professionally produced full colour Amiga magazine is still being printed. It’s a testament to Andreas and his team of editors, contributors and translators….and of course the Amiga community who continue to support the publication by buying the magazine. Long may it continue.

Right, that enough for now. It’s a short update but I really need to finish packing my bags.