With the whole world worrying about the coronovirus threat, or COVID-19 as it’s now officially called, I returned from my winter trip to Europe and have since come down with a heavy summer/winter cold! And before anyone starts worrying, I had the coronovirus test and I passed, well I think I passed, the result was positive! That was a joke by the way, quite a weak one I agree but in my current state of health its all I could manage. My trip to Europe was hectic and varied, covering both Amiga and non-Amiga business coupled with a great trip to Athlone to attend Amiga Ireland 2020, the first major Amiga show to celebrate the Amiga’s 35th birthday.

I’ve written a very short report about Amiga Ireland in my next Soapbox article for Amiga Future magazine so if you want to know more you will have to read the next edition. One thing I can say is Amiga Ireland is a great show and well worth a visit if you get the chance. The friendliness and socialising is “contagious” and this year Dave Haynie made a special appearance. A small group of us, including Dave, ended up talking and drinking through the night and most still made the opening of the show at 9am on Saturday morning. Mind you, international travel from Summer to Winter and back, little or no sleep coupled with heavy helpings of triple-A fun does have its consequences. Cough, sneeze!

While COVID-19 poses a threat to world health it has also had a major affect on international business which, according to a recent CNBC report could impact 5 million companies worldwide that rely on the output from Chinese factories and other businesses in the affected areas. According to reports, “Dun & Bradstreet analyzed the Chinese provinces most impacted by the virus, and found they are intricately linked to the global business network. The affected areas with 100 or more confirmed cases as of February 5 are home to more than 90% of all active businesses in China.” There is a genuine concern that the coronavirus outbreak could damage the global electronics industry. 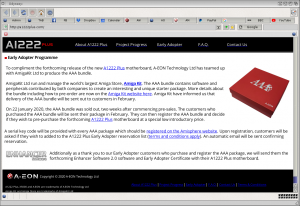 Even A-EON Technology and AmigaKit have been affected with the supply of electronic components and circuit boards drying up. Matthew Leaman informed me that, due to factory shutdowns, several of his new classic Amiga hardware products have not been shipped or are now greatly behind schedule. A-EON Technology’s A1222 early Adopter development and release schedule has similarly been affected and Matthew thinks the delays could push production into the third quarter of this year. Of course none of this compares to the concerns over the loss of life but it make you realise, in case you’d forgotten, what a global interconnected world we live in.

In better news, Serial Codes will be emailed to all AAA Bundle Customers next week which will allow them to register for the A1222Plus Early Adopter edition. Matthew also confirmed that the AAA Bundles themselves will now be shipped out the first week of March. For more information and updates check out the A1222Plus website.

What the h*ll is Trevor’s Axiom?

Continuing with the virus theme. While I was travelling in Europe I found myself in a hotel room with some time to kill. Hey, who said you should have watched the hotel’s XXXX channel?  Anyway, I skimmed through Netflix’s offerings on my ALICE laptop looking for something light and easy to watch. I spotted a more recent series of South Park being promoted. I haven’t watched South Park for years and decided to watch “The End of Serialization As We Know It” from Series 20. About four and half minutes into the episode, a group of trolls explain Trevor’s Axiom to Kyle, who immediately responds with, “what the hell is Trevor’s Axiom?” I was thinking the same thing myself. According to South Park, it is a theory of online trolling in which one person can create a massive reaction on the internet. Their theory goes – Person A trolls Person B but it’s not really about Person B. Person A wants to provoke a reaction from a third party, Person C. The intention is that person C’s gross overreaction and self righteousness to the trolling of person B will elicit further reactions from persons D through F, who are not trolls but cannot help themselves from ripping on person C . Their reactions lead to outraged persons G through N and it keeps going like a fission reaction creating a fusion explosion bringing out the worst in humanity. Hmm, I may have seen this in action on one or two community websites?

First and foremost, I categorically deny that I have anything to do with the Trevor’s Axiom or trolling! Honest. 🙂 But the wacky theory put forward by the crazy, genius minds of Trey Parker and Matt Stone did get me thinking about trolling and the spread of misinformation and fake news on the interweb. An MIT study found that fake news travels faster that real news on Twitter. The research reported that, “falsehood diffuses significantly farther, faster, deeper, and more broadly than the truth, in all categories of information, and in many cases by an order of magnitude.” Even worse, “the spread of false information is essentially not due to bots that are programmed to disseminate inaccurate stories. Instead, false news speeds faster around Twitter due to people retweeting inaccurate news items.”

Is it a wonder that cyber-risk researchers at Stanford Engineering have been using tools for modelling the spread of infectious diseases like a deadly strain of Ebola to analyze the spread of fake news? Much like a virus, the researchers say that “over time being exposed to multiple strains of fake news can wear down a person’s resistance and make them increasingly susceptible. The more times a person is exposed to a piece of fake news, especially if it comes from an influential source, the more likely they are to become persuaded or infected.”

The European Union issued a JRC Digital Economy Working Paper on the digital transformation of news media and the rise of disinformation and fake news. It concludes that news from strong newspaper brands still attract large audiences to their newspaper websites and that real news consumption on these sites dwarfs fake news consumption. However, it also concludes that fake news travels faster and further on social media sites. Now there’s a surprise. Not! Don’t get me wrong, the Internet has become a vital and interwoven part of modern society and I for one would not want to return to a time before the birth of the WorldWideWeb and graphical web browsers. It impacts all of our daily lives and has brought positive benefits to education, business, communications, healthcare and government which still far outweigh the negative elements but, just like the Force in Star Wars, it does have a dark side.

As for Trevor’s Axiom, I wondered where South Park got the name Trevor from? On searching the web I found a children’s book entitled “Trevor the Troll” and various other Trevor trolling references. It’s on the internet so it must be true!

Apologies to Peter Jackson for using the film title to the first movie in his Hobbit triology, but with Robert Bernardo shortly arriving in New Zealand I thought it was fitting. As many of you will know Robert is the President of FCUG, (Fresno Commodore Users Group) and every year attends AmiWest in Sacramento to capture videos of the Devcon sessions along with the AmiWest presentations and speeches which he posts online during and after the show. Although I used Jackson’s film title, Robert’s journey was not totally unexpected. 🙂

Robert retired from his teaching job a few years back and made the first of his round the world trips in 2016 to attend as many Amiga and Commodore user events he could find. He visited me in New Zealand and of course he wanted to see my Commodore and Amiga computer collection. He was very surprised to discover I had a couple of Commodore branded Intel Pentium 75 laptops which he and his fellow FCUG members did not know even existed.

After his short stay in New Zealand we both travelled to Australia to attend the Adelaide Retro Computing meeting coordinated by Epsilon of  Epsilon’s Amiga Blog fame. If you want to read Epsilon’s excellent report of the event click this link. Robert also produced a video of my presentation at the meeting which should be available online. Safe travels Robert, see you soon in Wellington.

I mentioned that Amiga Ireland was the first Amiga’s 35th birthday event this year. There are many other 35th birthday celebrations in the planning stages. I know because I’m involved with and sponsoring at least three events around the world on behalf of A-EON Technology.

Some like Marcel and Marvin, the organisers of Amiga30 in Amsterdam, have already posted details of their event,  FLASHBACK 20/20, while others are in the very late planning stage and should be announcing information very soon. Anyway, watch this space. Viruses permitting, 2020 should be full of Triple-A fun for all Amiga enthusiasts whatever your Amiga flavour.