Amiwest has come and gone for another year and I’m now back in the New Zealand as the Southern hemisphere heads towards Christmas. I don’t think my Northern hemisphere imprinted brain will ever come to terms with “winter” being summer time down under. 😉

As several other attendees have already have posted excellent blogs I decided not to write an Amiwest report this year, but I do have a few Amiwest highlights/tidbits to share:

* I really enjoyed listening to Colin Proudfoot’s stories about his time as Joint CEO of Commodore UK, particularly the failed bid to acquire the Amiga’s assets after the Commodore bankruptcy. When he and David Pleasance turned up on auction day they discovered that the manufacturer they had lined up to make all their new Amigas had, with some inside help, switched sides and aligned themselves with the ESCOM bid. The rest as they say is history. According to Proudfoot, Commodore UK was one of the most profitable divisions of  Commodore and at it’s peak had an installed user base of 4,000,000 Amiga users. However, what many people do not know, including myself, Commodore was also the second largest PC manufacturer in Europe.

* Eldee Stephens excellent in-camera sneak peek of the new features in AmigaOS 4.1 Final Edition. Apparently his presentation was supposed to be off-camera, for the benefit of the Amiwest attendees only, because Hyperion Entertainment had granted Amiga Future magazine exclusive rights to release details of the Final Edition update. However, no one told Bill Bosari who was in charge of the live video streaming and when the presentation finished he admitted, somewhat sheepishly, that he had streamed the presentation live over the net. Ooops!

* The Amiwest catch phrase: Every year there is a saying or phrase which seems to to catch on during the show.  Last year it was, “That’s not what you said last night!”, which was actually exported from the AmiJam show in Calgary which took place a month earlier. I won’t say how the phase was started (blame me) but pretty quickly everyone was saying it in reply to someones comment or statement. This year, Eldee Stephens was surprised to learn some obscure technical detail which was only known to the inner circle of AmigaOS developers. When he exclaimed, “I did not know that”, Steven Solie, the AmigaOS Developer Team Lead replied, “You’re not on the list”. Needless to say that became this years’ phrase! 😉

* Meeting graphic artist Ken Lester (klesterjr) for the first time in person and convincing him to give AmigaWorld a second chance. 😉

* Hearing Andy Broad singing the blues and playing his acoustic guitar. Not only is he an excellent software developer he is also a superb musician, who when performing, transforms from a quietly spoken Englishman from Portsmouth into a charismatic blues player from the deep south.

Houston we have lift off!

OK maybe it’s not quite as exciting as a NASA space mission but the launch of AMIstore on November 10th was a massive achievement for Matthew Leaman, the M.D. of A-EON Technology and the main developer of the AMistore software. Following several years of planning and 18 months of coding he finally released a working RC1 to an unsuspecting Amiga public. He had hoped to sneak AMIstore out for a soft launch while he worked out the last few bugs, but the response has been overwhelming with registrations and downloads exceeding our most optimistic expectations. If you want to find out more about AMIstore please check out Epislon’s pre-launch sneak peek and post-launch review blogs. Meanwhile, expect continuous improvements and more content over the coming months.

The power of Amiga Emulation

If you watched the recent Amiwest videos you may have seen Epsilon‘s demonstration of AmigaOS 4 Classic running under emulation on his x86 Mac laptop.

Thanks to the excellent work of Toni Willen and Frode (FS-UAE) it is now possible to run the Classic version of AmigaOS 4 through emulation of Classic PPC hardware using QEMU under WinUAE PPC. At the moment the emulation is slow and quite buggy and is limited by RAM size and Picasso IV screenmodes but it is a real tribute to the developers and I have to say it quite impressive seeing AmigaOS 4 running on my Windows 7 PC.

However, for the ultimate in Amiga-on-Amiga emulation, it has got to be ChrisH’s RunInUAE turbo charged by Álmos Rajnai (Rachy) JIT running AmigaOS 3 68k through emulation on an AmigaOne PowerPC machine under AmigaOS 4. It really should come as no surprise since Rachy is the author of Petunia, the 68k JIT task based emulator that provides backwards compatibility for 68k applications under AmigaOS 4. Rachy has just released his latest PPCJIT Beta o5 and is counting down to the final version 1.0 release. In other good news ChrisH has implemented support for the JIT beta in RunInUAE and it is now possible to turn the JIT emulation on from the menu. Rachy has even produced an optimised a version for the AMIGA one X1000. The full RunInUAE Beta 3 package including the PPC JIT Beta 5 can be downloaded from this link. You will probably not be surprised to learn that Epsilon has already written a blog on the subject.

My wife has decided, since reading about the Amiga curse, that I need to live a little longer and has put me on a healthy vegetable juice diet. She creates the juice herself by juicing a mixture of raw vegetables, fruit and ginger which usually results in a brightly coloured but nevertheless tasty liquid. I told her I would give it a try as long as it was in my favorite glass and the colour of the juice was red!

Unlike one AmigaOS 4 developer, who shall remain nameless (hint: think of the bearded developer in a dress) who keeps his AMIGA one X1000 powered up 24/7, I tend to switch mine off when it’s not in use. 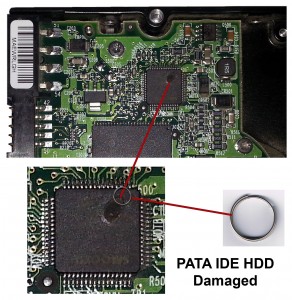 So when I powered it up the other day I suddenly became aware of a very faint electrical burning smell. I had about four machines running at the time, testing the AmigaOS 4 “Final Edition” iso, so I quickly checked them all only to discover that a faint burning smell was coming from my X1000. I powered down the machine and opened up the case. All seemed OK inside and the smell was not particularly strong. However, when I checked my front-loading removable HDD drive rack there was that unmistakeable smell of burning electronic components. I removed the drive carrier unit and slid off the plastic lid and the acrid smell was almost overpowering. The last time smelt something that bad was when I plugged my 110v A2000 into a 240v supply a few years back, fortunately the only damage done, apart from to my pride, was to the A2000 PSU which was totally fried – so much for slow blow fuses. Anyway, I took the HDD out of the carrier and found what looked like a tiny metal ring which had shorted out one of the components on the base of the HDD. I’ve no idea where that came from and can only think it was left in during the manufacturing process. Luckily, apart from the now dead HDD, no other damage was done. What more surprising is that I’ve been using the HDD in the carrier for at least 6 months. Very strange!

While I was finishing my blog a gentle rumble reminded me that New Zealand is located in the Pacific Ring of Fire. Fortunately the quake epicenter was quite deep and offshore to the North East and although my computer shelving swayed for about 30 seconds nothing was dislodged or damaged.